Thank you to Andrew Gordon for his kind words on our latest concert ‘When Handel Came to Haddenham‘ on Haddenham.net.

Followers of the Witchert Chorale have come to expect an evening of first class music with a mix of well-loved and recondite numbers delivered with the group’s trade-mark humour and sparkle. Saturday’s Christmas concert in St Mary’s was no exception. 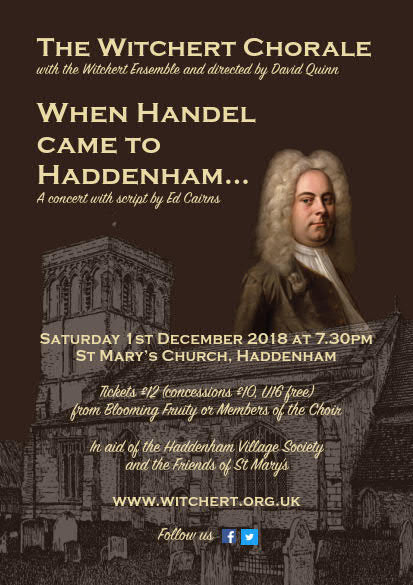 It was to be an evening of Handel and his contemporaries, than which, with this group in that setting, a more delightful prospect could hardly be imagined. The added bit of fun this year was the arresting theme: ‘When Handel came to Haddenham…’. This was a story, written and told by Ed Cairns, spun out between musical numbers and thoroughly engaging if only for the bits of eighteenth century local history worked in.

The canard should have been spotted by historians (but not this one) from the dates in 1752, which never existed, any more than Handel’s visit, having been eliminated when Britain belatedly joined the rest of Europe in adopting the Gregorian calendar.

But, as Ed observed, we were there for the music.

To listen to the eighteenth century harmonies from this well-blended, spirited but disciplined choir, wonderfully accompanied by the 4-member Witchert Ensemble, was as uplifting as ever and would have soothed the most troubled soul.

The programme included some pieces intended for very large choirs, such as the Coronation Anthems and the splendid Worthy is the Lamb from the Messiah, and it was remarkable how these numbers took new life from this small group, of 18, singing with such intimacy and pin-sharp accuracy.

While Handel dominated the programme, there was an outstanding piece from an older composer, Henry Purcell. The crescendo at the end of his Hear my Prayer, for its sheer beauty of sound and in the setting of St Mary’s, will for many have been the emotional high point of the evening.

After the singing there were heartfelt farewells to Alison Court, who, with director David Quinn, founded the Witchert Chorale in 2004 and who (with Ed’s constant support) has always been the chief animator of the group and author of its distinct personality. The batten passes to Ann Millar, organiser of this year’s concert (a triumph).

Proceeds from the concert, very well attended as usual, will go to the Haddenham Village Society and to Friends of St Mary’s.