The Witchert Chorale has just returned from their second visit to Berlin, where they have enjoyed such warmth and welcome they could hardly believe their eyes and ears. Their friendship with the Golgotha Kantorei of central east Berlin is now in its sixth year and both choirs have now visited each other twice. The friendship is deepening. 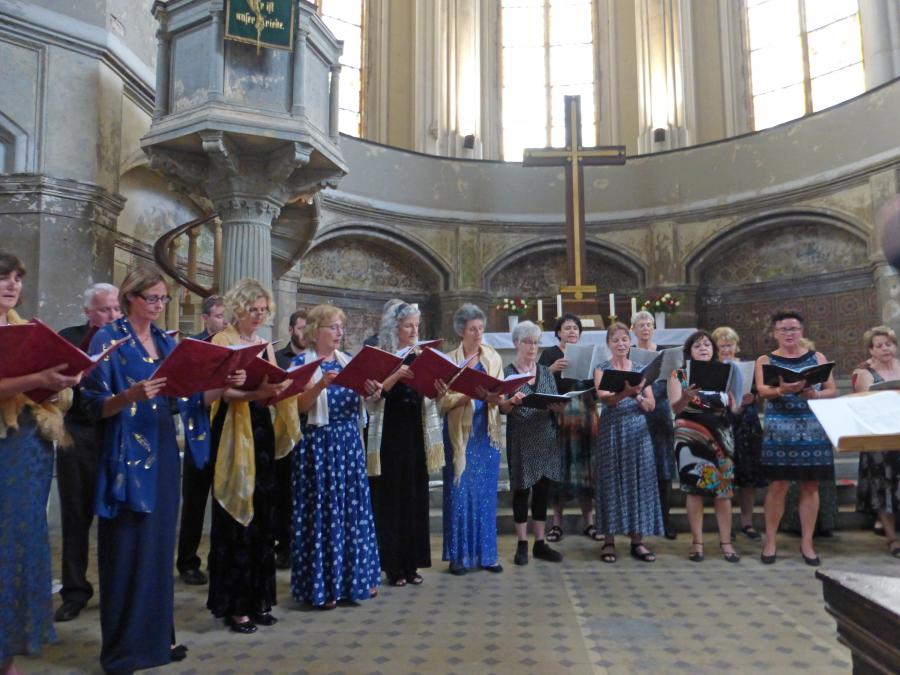 The central point of the weekend was a joint concert on Saturday night in the amazing acoustic of the Lutheran Zionskirche. (The Zionskirche was incredibly important before the fall of the
Berlin Wall as a meeting point for opposition groups, often lead by Dietrich Bonhoeffer.) The twochoirs sang separately and together a programme of varied music from the 16th century right up to an arrangement of the Beatles number Because. The concert was most warmly received by a good audience. Jenny Hardy, former members of the Witchert Chorale, travelled all the way to Berlin in her campervan with her husband Andy, and she reported that Witchert “sounded sublime” Here is a little of her report back:

“Silence is golden. So it was as the final note of several songs ascended into the lofty space of Zionskirche. The acoustics lent themselves perfectly to the slower songs — some of the best singing I have heard from Witchert. The dissonances of Little Lamb — a personal favourite — beautifully executed…. How well I recall rehearsing these over and over to achieve perfection!

“Northern Lights -both ethereal and dramatic with more gorgeous dissonances… closing my eyes the sounds matched the colours of the Northern Lights… and my, how the audience responded. The silence before applause was breathtaking.”

Beyond the concert there was much convivial celebration over copious and delicious amounts of Würst and Kartoffelsalat, and beer and wine, culminating in a barbeque on the banks of the river Spree in the garden of one of our hosts, a beautiful afternoon of sunshine, swimming and friendship.

The singers of Witchert say it is an enormous privilege to have made this connection across international borders. They may not always understand each other since not every member of each choir has fluency in the language of the other’s(!) but through singing and smiling, a great bond has been formed.